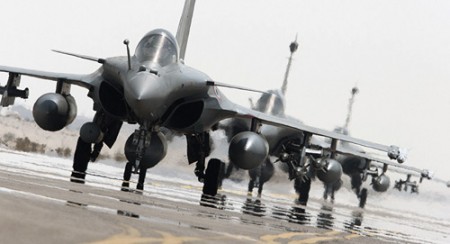 President Obama has said that “America stands shoulder to shoulder with France“. However, this is precisely the root cause of the current problem for France. By bombing ISIS targets in Syria, France has just paid the price for standing “shoulder to shoulder” with the United States.

None of these events are isolated. There are no good guys and bad guys. There are only vengeful characters on both sides bent on blood and retribution and these characters don’t care at all about civilian casualties on the other side. There is no doubt that Obama has killed more innocent civilians in Iraq, Afghanistan, Pakistan, Somalia, Yemen, and Syria than any demented group of Muslim terrorists, yet only murderous Muslims are “the devil“.

The appropriate response to a growing jihadist empire fueled by conflict with the West is to end the provocation. Chelsea Manning made this exact point in September of 2014…

“How to make ISIS fall on it’s own sword: Degrade and destroy? The west should try to disrupt the canny militants into self-destruction, because bombs will only backfire”

Obama, Cameron and Hollande would have been wise to listen to Ms. Manning instead of pursuing the tired, counter-productive policies of Bush and Blair.

This entry was posted on Saturday, November 14th, 2015 at 6:13 pm and is filed under UK Policy, US policy. You can follow any responses to this entry through the RSS 2.0 feed. Both comments and pings are currently closed.